How To Increase Your Razor’s Damage

For someone who is a 4-star character, Razor sure knows how to bring out those big damage numbers. So the biggest question you should be asking yourself is how fast can I delete enemies with Razor? 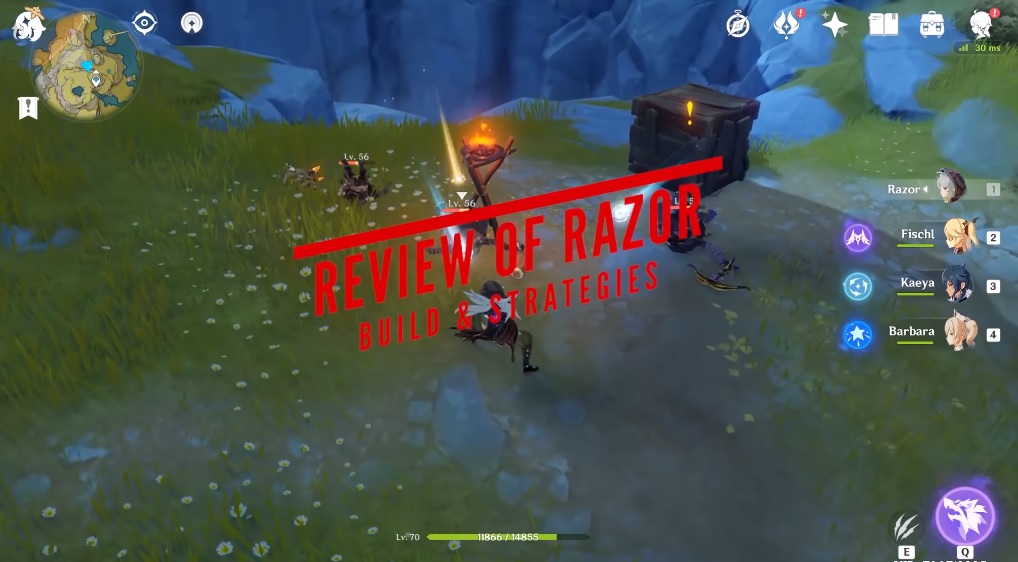 There are two reasons why Razor is considered to be selfish. The first one is how his elemental burst works. He summons his wolf companion which can be lost if you switch him out. Because the energy cost is pretty big to activate, the burst was designed with an elemental skill that grants him a faster energy recharge rate but that’s exactly why we have this as a second reason.

You need to keep using the elemental skill actively in order to build up his burst faster and you always need to keep an eye on your energy bar to determine whether you should create an additional sigil from simply tapping the skill or convert those sigils into actual energy by holding the skill.

The short answer would be to gather those sigils when you’re only halfway through his energy bar and afterward, cash in those sigils for massive amounts of energy.

Razor’s hunger talent even makes things easier for you since you get an additional 30% recharge when you’re halfway through your energy bar. Essentially, the more you play Razor the more natural you will become with this energy management.

What’s also great is that you don’t lose the sigils even if you switch them out so you can chain your elemental reactions with other teammates while at the same time making sure to use his skill whenever it’s available and build up his energy bar.

All this talking about energy management will make you fall asleep but once you activate his burst the big numbers start rolling and you start to understand that you can repeat this awesome process more often if you just keep an eye on his energy.

There are a couple of weapons that work really well with him. Prototype Aminus, Debate Club, and Skyrider Greatsword are all excellent free to play options but each of them accomplish different goals.

Skyrider Sword has the best potential when used with Razor’s burst activation but when you’re only switching to him to use his claw and maybe drop a few basic attacks. To fully get the bonus you will need two seconds to get back on track.

The Debate Club on the other hand is excellent when dealing with swarms of enemies but suffers when it’s just one monster.

Finally, the most well-rounded weapon is Prototype Aminus. While it has a very long cooldown of 15 seconds, it can trigger a small area of effect blast and at refinement rank 2 it deals 300% damage of your attack to enemies which can almost instantly delete anyone caught in the blast.

Refining this weapon to max rank can take a while but because weekly bosses can draw prototype weapon materials you can expect at some time to have this weapon max refined as a free-to-play player.

When it comes to artifacts it will heavily depend on everyone’s situation of what they’ve got in their backpack because talking about ideal sets or stats is very unrealistic with the way everything is heavily randomized.

You definitely want to get an attack percentage on your hourglass and either a physical damage bonus or the same attack boost from your goblet.

For the Circlet, it will depend on how much either you have critical rating or damage but getting one of those instead of your attack can give you a big boost in damage.

The big reason why you want your Circlet to have a critical rating or damage would be the elemental burst attack speed. Since your attacks become harder to interrupt and you ditch them out faster you are more likely to score critical hits from the number of increased attacks you deal. 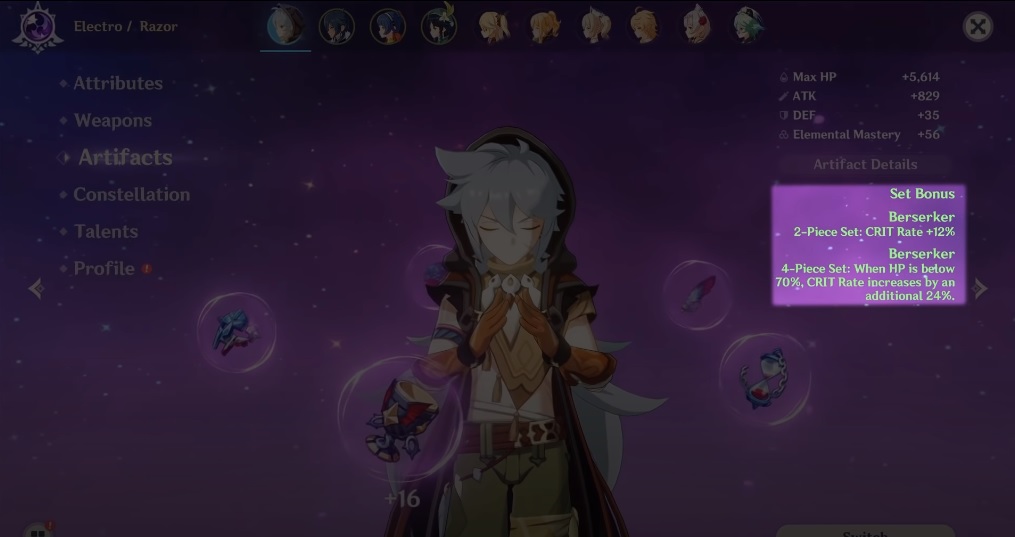 Finally, regarding the sets, you can see from this Razor that I am still using Berserker’s 4 set bonus but you could also get the 2 sets or 4 set bonus from gladiator provided you get lucky with main stats.

You could also obtain the 2-set bonus from either Bloodstained Chivalry or Martial Artist or even Resolution of Sojourner for the 18% increased damage. Basically, you want to get a good critical hit rating and damage from sub stats and the main stat of Circlet while also at the same time try to get as much damage boost from the set bonuses.

Razor’s biggest goal is to become the main physical damage dealer that can also provide some nice electrical damage as a side bonus.

When it comes to elemental reactions the safest choice would be to have a Cryo teammate who can create Superconduct reactions. Once enemies become afflicted by it for the next 9 seconds their physical resistance gets reduced by 50% which can go into a negative percentage. Meaning you can deal an increased amount of damage even if someone has 0% physical resistance to begin with.

Because Razor’s primary role is to be a good physical damage dealer, you can get your next few basic attacks to deal an increased amount of damage not to mention if you have someone with high elemental mastery triggering the Superconduct you will also deal a sizeable amount of reaction damage.

You could also go for a Pyro character who will trigger Overloads from Razor’s inflicted electro status on enemies when he uses his elemental skill but in the end, your team building will heavily depend if you’re doing spiral abyss or end game domains.

The key thing to remember with Razor is that he is only to be used for initiating reactions by applying for the electro status while the rest of the teammates who have higher elemental mastery can capitalize on creating those reactions.

Razor is one of the most fun characters that you can play right now and he’s got a lot of charm. You can easily use him as your main damage dealer and because he is a claymore user you can also break geo shields which comes in very handy at later levels of the Spiral Abyss.

He is also going to demand a lot of your attention in order to maximize his energy recharge rate which also means that you won’t be giving too many elemental reactions to your teammates. He also loses his burst if you switch him out but at least his sigils remain so you can gather energy without worrying about losing your progress. However, when everything finally clicks and he unleashes his burst, his wide range of attacks and the increased speed of delivering them makes him a powerhouse for the whole duration.

But is kinda slow to kill aoe I mean