There are only a few 4-star characters in Genshin Impact that deserve to be called top tier and Fischl is one of them. The only question you need to ask yourself is how will you build her? 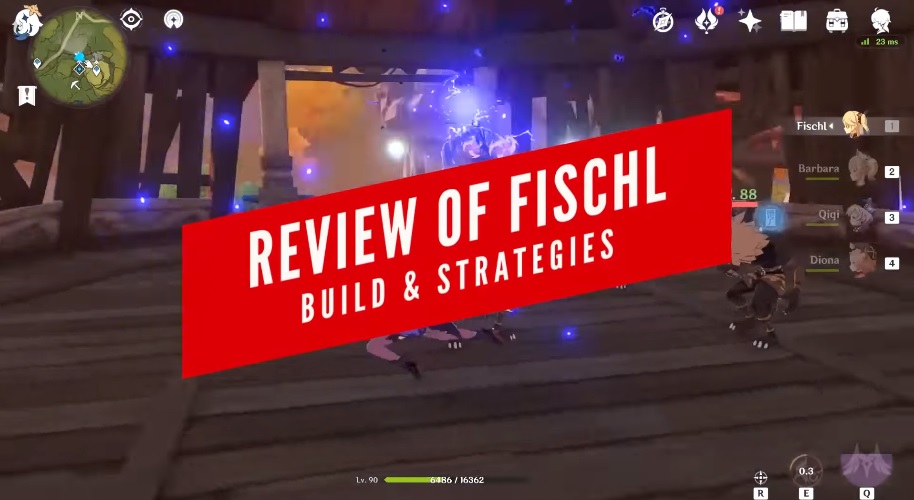 When it comes to mechanics, there’s only one you need to master with Fischl and before you can start to unleash your devastating lighting attacks. It all really comes down to your cooldown management.

Whenever you summon Oz with your elemental skill even though you can’t see it visually the internal cooldown starts ticking immediately. So when the raven disappears, you will see that there are roughly 14 seconds remaining before you can call him again. This means that if you have your elemental burst ready right before Oz disappears, you can activate it which will re-summon him right after the burst ends.

Once you get really good at it, the downtime of Oz will be very short and you can utilize nearly 20 seconds of him actively attacking your foes and if things go perfectly, 5 seconds after, you can re-summon him once again. And of course, managing this cooldown combo without a visual aid is going to be challenging so take your time, and eventually, you’ll have a pretty good feeling when to activate her burst and extend your raven’s duration on the field.

One last thing that’s worth mentioning is you can select a summon location for Oz by holding down your elemental skill. You can place him near the biggest group of enemies for his initial electro explosion. Also, if you see that enemies are leaving his attack range, you can re-summon him again by pressing the elemental skill and he will obediently show up at your current location.

And that’s all you really need to do to master these crucial mechanics of Oz as effectively as possible and you can move on to producing bigger numbers with your gear.

There’s a lot of exciting equipment choices you will need to make and it will depend on the role you choose for Fischl.

When it comes to weapons, if you’re going to be focusing on making Fischl a top tier support character, then there’s going to be nothing better than The Stringless Bow which will provide elemental mastery for stronger reaction damage and the passive skill will also give a massive boost to her skill and burst.

The second priority would be the Favonius Warbow which will allow you to cast your burst more often.

As for the third priority, you could go for The Viridescent Hunt which mainly gives a value from its sub stat since CRIT rating is an important stat for late-game while the passive skill is more of a nice side bonus.

Finally, Prototype Crescent is your go-to weapon from the blacksmith as a F2P option and if you’re just starting out in the game, you can use the Raven Bow for elemental mastery but only until you can obtain one of the other mentioned weapons.

Now if you want to build Fischl as your ultimate damage dealer, then the biggest priority goes to Rust because of how insane it is. Unless you own one of the 5-star bows, Rust is going to be your partner in crime when it comes to big numbers.

Next in line would be either The Viridescent Hunt or Blackcliff Warbow and that’s mainly because we only care about their sub stat which is extremely important in order to achieve the best damage output since you want to have as much of critical rating and damage as possible because of how well they scale in late-game.

Finally, for the F2P option, you can get the Compound Bow from the blacksmith or Slingshot if you’re just starting out.

If you’re focusing on support, then your best bet for late-game Fischl is going to be the combined 2-set bonus of Gambler and Thundering Fury. Keep in mind that because Gambler doesn’t have a 5-star version and you will be missing out on stats so it’s recommended to use the Flower as one of the slots to minimize the raw stat loss.

But having an additional 20% elemental skill damage and a 15% Electro Damage bonus without any dependencies just makes Fischl into a powerhouse of a unit.

When it comes to main stats, just make sure that you have either Elemental Mastery or Energy Recharge as your main stat for the Sands artifact and Electro DMG Bonus for your goblet.

Getting more elemental mastery from sub stat is also recommended but as usual for everything else to work, obtain as much ATK as possible from your sub stats as well as the Circlet. But if you’re just starting out, then you can grab any of the 2-sets that provide extra ATK from their bonus and then of course, just focus on getting as much ATK as you can, before you reach adventure rank 35.

When you’re building your Fischl as the main damage dealer, then there’s going to be nothing better than a Gladiator 2-set bonus combined with Bloodstained Chivalry 2-set bonus. And the raw power these bonuses provide will give you a strong foundation for critical rating and damage.

Just like many other damage dealers who specialize in physical attacks, you’re going to want to build a 2:1 ratio for Critical rating and damage followed by as much ATK as you can get. Don’t forget to obtain a goblet with a physical damage bonus.

And of course, if you are still below adventure rank 35, just follow the example given with support Fischl and focus strictly on ATK which includes both artifact sets and their stats.

Finally, you might have noticed that the Thundersoother set was not recommended and there’s a reason for that.

While in theory, this gives some of the best 4-set bonus that’s available in the game, and in practice, it can really slow down your performance. That’s because of enemies like Slimes which have an internal elemental status that doesn’t go away or enemies that receive elemental boosts in certain stages which basically takes away your attack bonus.

All in all, when it comes to what role Fischl will be performing, there’s a huge difference not only in weapons but also in artifacts. There’s a lot of weapons to choose from but some are more superior than others and the artifact sets follow in the same fashion except the only key difference being that it’s entirely random and it can take a while to obtain artifacts with decent stats.

Either way, finding the perfect artifact is essentially the end-game content in Genshin Impact so it’s going to be a pretty exciting journey to find what you need.

There are a few considerations you need to take into, especially if you’re going to be building strong teams for the Spiral Abyss.

Fischl, as your main damage dealer shares the same fate as Noelle – she can unleash her true potential of one of her roles by getting to higher constellation levels.

This doesn’t mean Fischl isn’t great at Constellation 0 when it comes to producing physical damage but the upgrades she gets especially at her last constellation can drastically change her performance. A lot of veterans consider her 1st constellation to be the bare minimum to start using her as your main damage dealer instead of support. That’s because Fischl is naturally great at being support as you can already tell from the way her elemental skill works.

Another important factor comes in when you start upgrading your talents past level 6. Obtaining books and monster materials is easy enough but the last piece of the resource is going to be a weekly boss drop that is completely random and it could take weeks for you to get these crucial materials.

So for example, if you decide you want to pursue Fischl as your main damage dealer then you need to level her basic attack talent. While as a support, you would have to focus on her elemental skill first. Maxing out one of these talents could take months, so having a solid long-term plan can help you out with reaching her true potential.

When it comes to team building, if Fischl is your main damage dealer, then one of the best teammates to start with is going to be a Cryo character.

Diona would be one of the top choices since her elemental skill compliments Fischl’s attack range and it’s easy enough to trigger Superconduct on enemies from a safe distance.

There’s a reason why Fischl as support is top tier. She can pretty much work with any team combination because of how useful her raven is not to mention how easy it is to trigger elemental reactions. For best results, anyone from Hydro or Pyro can help make her deal with insane reaction damage.

All in all, deciding on how you want to build your team together with Fischl is a good choice before getting lost in the middle of two different roads. Because she works really well in nearly every team composition it would only make sense to capitalize on her true potential by either going into full support or a dedicated damage dealer.

Fischl is definitely one of those few characters in the game that can get you through a lot of challenging content especially if you’re a F2P player.

One of her best-selling features is her elemental skill that can remain for a prolonged period of time thanks to her elemental burst. The fact that her raven stays on the field and repeatedly attacks an enemy within a medium-range while you can switch between any character is probably one of the best ways to produce consistent damage.

This also means that because of how flexible her whole skill kit is, she can cause a lot of elemental reactions for your team whether you want to trigger them with Fischl or someone else.

This makes transformative teams extremely viable especially if they utilize elemental reactions like overload or electro charged. Not to mention how well this works if you’re playing within adventure rank 40 thanks to how damage scaling works.

But when it comes to drawbacks, the only one that’s really more of a progress restriction than a gameplay problem would the fact that her capability of being the main damage dealer lies behind her constellations especially her 4th and last constellations. This doesn’t prevent you from playing this role but it’s something worth keeping in mind.

Still, Fischl truly shines as a top-tier character and the ability to perform both roles is something that a lot of other characters could wish for so keeping her on your roster and growing her potential is only going to provide you with a lot of satisfying results. Well, maybe the only thing that’s not satisfying about her is when you’re trying to understand what in the world she’s talking about. Maybe that’s why Oz has such a short cooldown.